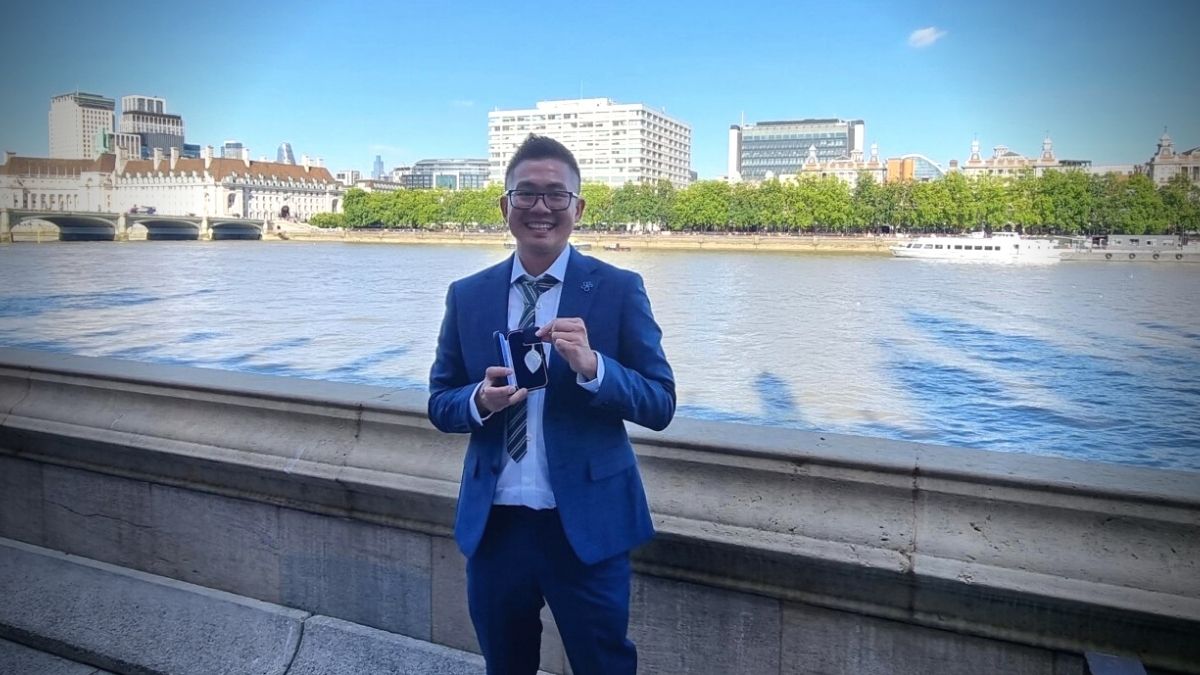 A Mauritian MSc Dementia Studies student, who balanced his studies with a full-time job as a care home manager while also raising thousands of pounds for charity, has been recognised with a prestigious award.

Originally from Mauritius, Nicolas has worked in social care and care of the elderly for the last 16 years, beginning his career as a cleaner in a care home in 2015 before becoming the youngest UK care home manager.

Reacting to his award, Nicolas, who is based in Essex, said: “I am overwhelmed and hugely honoured. I was not expecting it and I feel really proud to be among those recognised and to also be representing my home country of Mauritius.

“My charity work has given me great memories and allowed me to meet new people. I think I’m most proud of running the marathon during the first lockdown in 2020, virtually, for Alzheimer’s Research UK. I was determined to do it and didn’t want to let the charity down.

Nicolas has run nine marathons for Alzheimer’s Research and Alzheimer’s Society and raised £5,000 for Age UK. He is also the youngest trustee of Age UK Enfield and is a volunteer for the China Exchange Charity. He has won awards in sector specific areas such as National Dementia Inspiring Leader in 2017 and the Dementia Care Awards in 2019. Nicolas has also won praise for creating various virtual community groups, one being the Hainault, Barkingside & Chigwell community Group and also a dementia group on Facebook for support for families and friends of those living with dementia.

Nicolas’s passion for caring for those living with dementia was originally sparked after his grandfather become ill in 2013.

Nicolas said: “There was no diagnosis for Alzheimer’s at that time in Mauritius – I was the first one who recognised he was not the same.

“That experience drove me to want to make a positive impact for dementia care in the UK and also in Mauritius. I started studying my Masters in 2019, just when the pandemic started. Many people told me not to do it as they were worried I would not be able to manage work as a care home manager alongside my studies. However, I persevered, and my tutors were very supportive and helped me a lot and I also had great support from Student Learning Services.

“My passion for dementia and to make a difference in people’s lives continues to motivate me. In the future, perhaps I will write a book or go into dementia consultancy.”

Nicolas will graduate in November and hopes to pursue a PhD in Dementia at Stirling.

The British Citizen Award in partnership with One Stop, is now in its eighth year and recognises exceptional individuals who positively impact their communities, charities, and individual causes.

Nicolas was presented with his Medal of Honour on Thursday 7 July by Tom Redman, General Manager from long-term BCA Supporters Big Bus Tours who said, “Nicolas is the epitome of why Great Britain is ‘great.’ His tireless and selfless efforts to give something back to his community is simply fantastic and I feel incredibly honoured to have presented him with his BCA Medal of Honour.

The Medal presentation was hosted by TV and Radio presenter Naga Munchetty, and attended by BCA Patron The Rt Hon, Lord Dholakia. Medallists were then treated to an Open Top Lap of Honour tour taking in some of the Capital’s iconic landmarks, before going on to a post-event drinks reception and Certificate Presentation at Church House, Westminster.

Original article by University of Stirling.