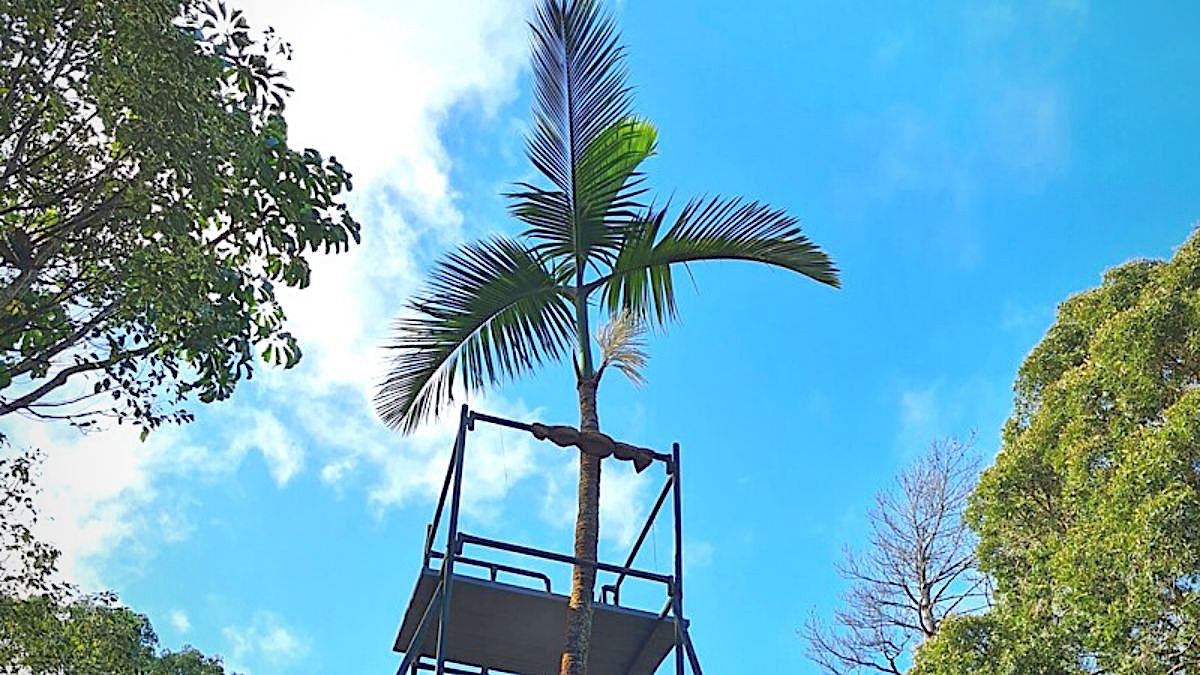 The ‘Lonesome Palm’, which lives in the Curepipe Botanic Gardens in Mauritius, is the last surviving member of the species Hyophorbe amaricaulis. Researchers have tried for years to help it reproduce, without success.

Elderly, damaged and spindly, the ‘lonesome palm’ has seed problems, germination problems and more. It has resisted multiple rescuers since the 1980s.

The fruit of one such assisted-pollination project, each containing a single seed, was sent to the Royal Botanic Gardens at Kew, near London in 2006. But lonesome palm seeds don’t grow if they are planted, so embryo rescue was used.

The plantlets grew to 25 centimetres long. Then, one day, their fine white roots turned brown and they died, doubtless because of some nuance of the culture medium.

In 2010, Kew horticultural scientist Carlos Magdalena negotiated to collect some freshly picked palm fruit while he was visiting Mauritius. Owing to a misunderstanding, two of the five fruit stored in a nearby fridge were eaten by a garden labourer who did not know their significance. Back at Kew, the seeds from the others failed to germinate.

One obstacle is that the palm produces male and female flowers at different times, to avoid self-fertilization.

Using a ladder and a brush, scientists are trying to override this process to collect, store and transfer pollen.

The Mauritian Wildlife Foundation, with help from botanists elsewhere, is attempting to save multiple critically endangered species at once, but success at propagation varies widely.

There have been some dramatic restorations, including of some species from which only a single tree remained. Thelonesome palm, part of this project, continues to resist.

A fourth attempt has begun. Nets hang around the tree to catch the male flowers and store their pollen for hand fertilization when the female flowers appear.

In France, botanist Stéphane Buord at the National Botanical Conservatory of Brest hopes to overcome the problem of too few seeds by tapping into the large quantities of seeds produced by Hyophorbe vaughanii, a close Mauritian relative of the lonesome palm.

He and his team have spent years working out a complex technical protocol that coaxes its embryos into rooted seedlings that survive outside a test tube. Now he is waiting to try this approach on the seeds of the lonesome palm.

If he succeeds, the palm might eventually be reintroduced into a national park or into the wild.

Kersley Pynee, a conservation scientist at the Mauritius National Parks and Conservation Service, has reintroduced other trees and shrubs and says it is an uphill struggle. Plants can fall victim to fungi, pests and other assailants.

After one recent planting of 1,000 seedlings of the flowering shrub Nesocodon mauritianus, just 5 now remain, he says.

Nearly one-third of trees — more than 17,500 species — are threatened with extinction. This is more than twice the number of threatened mammals, birds, amphibians and reptiles combined.

Rasta the Artist and his wife on vacation in Mauritius