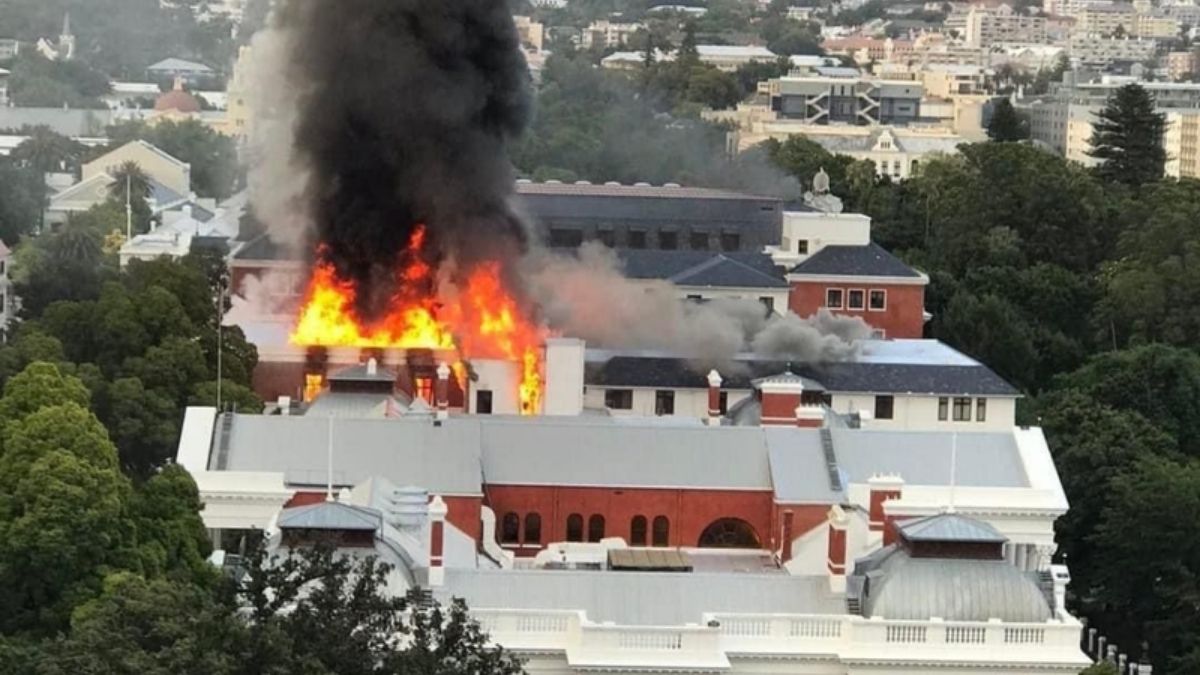 A major blaze fire tore through South Africa’s parliament in Cape Town on Sunday, causing the roof of one building to collapse and gutting the chamber of the National Assembly.

Media reports said flames were shooting out of the top of one building, sending plumes of thick black smoke into the sky above parliament and into neighbouring streets.

President Cyril Ramaphosa visited the scene and called it a “terrible and devastating event”.

The fire broke out on Sunday morning and more than 12 hours later, dozens of firefighters were still working to bring the blaze under control. No injuries or fatalities have been reported.

South African President Cyril Ramaphosa said it appeared that a sprinkler system “did not work as it was supposed to” and that a person was being questioned by authorities in relation to the fire.

Ramaphosa praised firefighters for working to “stop parliament from being razed to ashes” but said the fire had “devastated the parliamentary precinct and its contents and assets, including parliament’s historical treasures of heritage.”

A 51-year-old man was arrested and questioned by the authorities, police said.

“The roof above the Old Assembly hall is completely gone and the offices adjacent to it and the gym are destroyed,” Smith added.

The parliamentary complex, some of which dates back to 1884, consists of a cluster of buildings.

The fire broke out the day after anti-apartheid hero Desmond Tutu’s funeral was held at St. George’s Cathedral in Cape Town, not far from parliament.

President Ramaphosa said Tutu would have been “devastated as well because [parliament] is a place that he not only supported, prayed for, and wanted to see as the repository of the democracy that he worked so hard for.”

Smith said Sunday’s blaze was more serious than another fire that broke out at parliament in March 2021. In the March incident, the fire broke out at the Old Assembly and no one was injured.