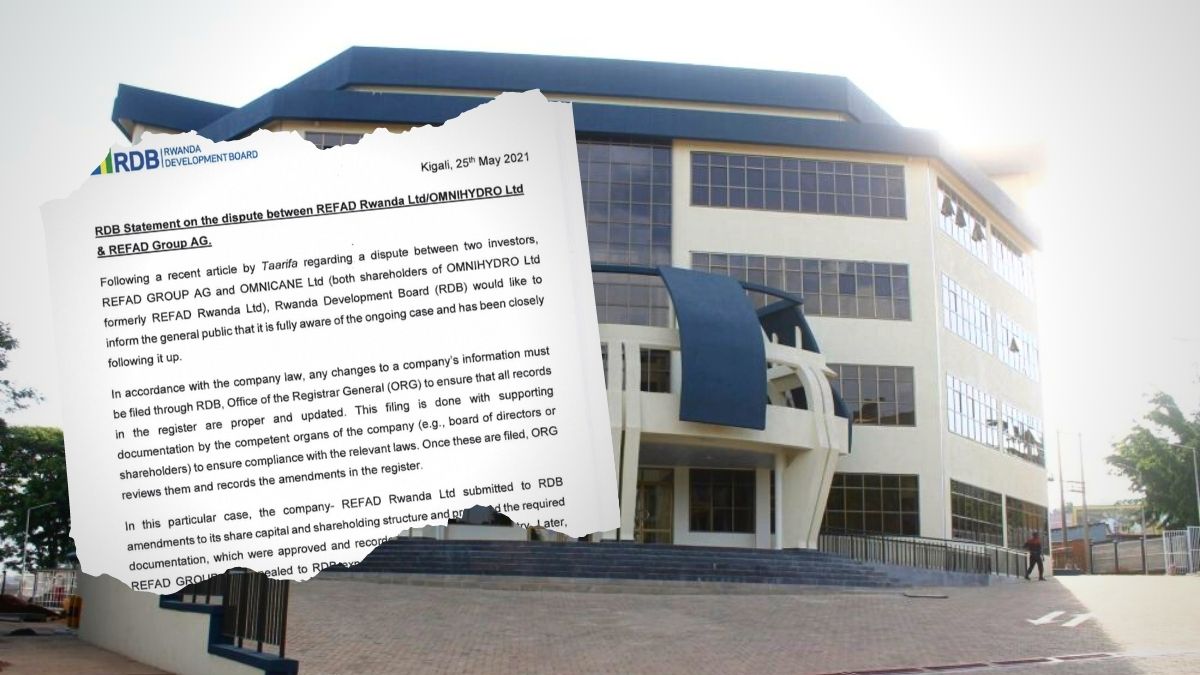 Document from the Rwanda Development Board confirming the dispute

Mauritian company Omnicane has been accused of operating in a manner that could be prejudicial to a dispute before Rwanda’s Commercial Court between shareholders in an energy company REFAD Rwanda Limited.

Early this year, REFAD Rwanda Limited, a firm investing in energy production was dragged to court by one of its shareholders after noticing that his shares had been mysteriously trimmed to an insignificant value, local newspaper Taarifa reported.

The newspaper quoted Dr. Jacques Ntogue, a Franco-Cameroonian entrepreneur and founder of REFAD Rwanda Limited as claiming that his stake in the company was worth 49% shares while Omnicane held 51% shares. REFAD Group AG and Omnicane Ltd are reportedly both shareholders of OMNIHYDRO Ltd formerly REFAD Rwanda Ltd.

However, Dr. Ntogue alleged that he learned that the company Capital structure had been mysteriously changed and his shares sliced to only 1.52%.

He further alleged that Rwanda Development Board (RDB) “validated this change without checking the document nor informing us.” The company name was allegedly changed from REFAD Rwanda Ltd to OMNIYHYDRO- which Dr. Ntogue claimed “is in itself an act of theft.”

According to Ntogue, before introducing these major adjustments, there should have been a board meeting followed by a shareholders meeting, However, “None of these meetings took place.” This is what prompted him to file a complaint in court.

Although the matter is still in court and the date of hearing extended several times due to Covid-19 pandemic restrictions, Omnicane has been accused of “illegally conducting business transactions without consulting or involving their partner Dr. Ntogue.”

“It is as if Omnicane has friends in Rwandan Intuitions and believe that they can ignore the law even while we are in court,” Dr. Ntogue was quoted as saying.

The newspaper claimed that Omnicane intends to inject funds in the same power project which is up and running.

This is apparently being done without considering binding procedures especially board meetings and shareholders meetings. “As 49% shareholders we were not consulted therefore can not agree,” Dr. Ntogue claimed. The request by the RDB to correct the Capital structure was also allegedly ignored twice.

This project is estimated not cost more than $12million (Rs500million).

As a court decision is being awaited, Taarifa cited REFAD GROUP AG as asking RDB to correct the company initial’s Capital structure: 51% Omnicane 49% REFAD Group AG file “as they have requested 2 times.”

It has also demanded the appointment of an interim Management.

In Mauritius, after being subject of much criticisms over its deal with the Mauritius Investment Corporation (MIC), the Omnicane group has reacted in its latest financial report to claim that “the business activities of Omnicane, a systemic group in the Mauritian economy, have and will be adversely affected.”

Questions on the package of Rs 4.5 billion bagged by the group remain unanswered.

For the financial year ended December 31, 2020, Omnicane suffered massive losses of Rs 3.2 billion, after losses of Rs 1 billion in 2019.

Read the original article on Taarifa

Top lawyer quit job in the wake of opinion on Uighurs